We were quiet for a while and we hope no one takes it personally.
For us it is not really quiet, although the days here are threading naturally and effortlessly together. The 24 hours economy, talked about often in the Netherlands seems to be the reality of the day over here, or better, a 7 days a week reality with no difference between Sun, Satur or Thurs.
Individual economic motives probably play an important role, especially for smaller retailers because for them its a hard struggle.
For the supermarkets it is normal to be open from 7 in the morning till midnight. With what kind of shift that is achieved we do not know, but it will not be with the irregularity compensation as we know it in the Netherlands.

Since we are here now for some time, preferences emerge for various neighborhood shops, supermarkets, market stalls and restaurants.
Conversely, people, especially in the smaller shops, start to recognize us and we are happily greeted on entering. And they all tell us enthusiastic stories, which of course can only be properly understood by S, since M's language deficiency is still very high. The Turkish spoken here, you can compare with the Limburg language in the Netherlands, a different accent and many words lent from the neighboring country. Additionally, here they speak double speed. No easy language lessons.

We are now almost two months on the road and honestly, we like it. Of course we miss the kids, family, friends and things like our own bed, toilet and kitchen, but it feels good to be here. A prelude to the decision to be taken? I do not know. Everything will depend on whether we can earn an income from work, here or in a remote way. 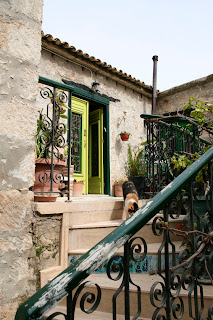 The way we live now is absolutely the end. It feels as if we placed ourselves in a Southern French Province house.

Because it is furnished, it is therefore full of stuff from other people. They have the habit to explore flea markets and shops and buy all kind of things. The result is that the house is filled with trinkets, a canopy bed, benches, table(s), chairs and cupboards. These cupboards are full of cups, plates, dishes, glasses, pots and pans, some with price labels still attached. On the walls rustic scenes, harbors, nudes and walled cities, mostly in watercolor. 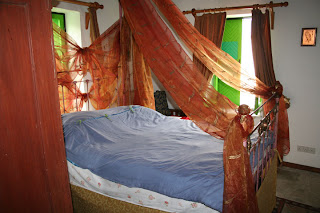 Most of that stuff we would never buy, but here, strangely, is it in place. Though we did ask for some big boxes so we can move several things to the basement.

The owner, Dogan, is very friendly. He is also our neighbor and lives with his wife Hürmüs in the other part of the house. We drink coffee regularly and sometimes we eat together. They see to it that we can really feel at home.


Of course there is the risk of seeing things too optimistic, but we often think that everyone here in Northern Cyprus is very friendly. Especially compared to the south and even compared with Turkey, while that country has a reputation for friendliness and hospitality. 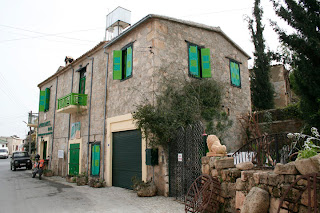 Not so long ago the house was restored. It used to be an olive mill. The space below the living area was used as storage. The original house was expanded over time. Not because the family was growing, but probably because the front part was a guesthouse. A kind of bed & breakfast for the farmers who came to have their olives pressed. The next day they could take their oil, freshly pressed, to their home.
So now we live there. The olives grow in the garden but are no longer pressed here. Therefore no more donkeys that used to make the mill go round. However many other animals. If you consider that we have only fish in Valkenswaard!
Now we wake up to the crowing of the cock and sound of the chicken (we share the fresh egg every other day), we jump out of bed (literally, it's a very high bed) and then, when we open the kitchen door ... eight cats and two dogs stare us, quizzically.

One dog is Dogan's, the other he has adopted from the street. His own dog, is not only named Chow Chow, but also is, is pretty watchful. The first time we got home while there was nobody else, was very exciting. The dog was standing at the top of the stairs and made a grunting sound. The sweat ran through M's crack. If CC smelled that, we do not know. M pretended to be tough and mumbled something like "Well Well" and walked past him without looking, than quickly climbed the stairs.
You should try to open a door for the first time, nearing dusk using a poorly fitting key while you tremble and shake and a slight panic takes over. Yes, M is simply terrified of dogs.
Fortunately, the dog stayed downstairs and the door opened. From the balcony at the front, M quickly warned S who was gathering the groceries from the car.
S, slightly less terrified than M, stepped firmly along CC and did her best to ignore him as best as possible. CC growled dangerously. With the adrenaline still fresh in his body M 'dared' to come out and call to the dog.
S entered safely, but that night M was afraid to get out.
This unexpected situation called for discussion. During the tour, the owner was always there and the photos had no threatening dog visible.
Although the house is very nice and romantic, being locked in for 2 months is not the intention.

The next morning, the first time we experienced the spectacle with the two dogs and eight cats, Dogan advised us to throw a biscuit to CC. 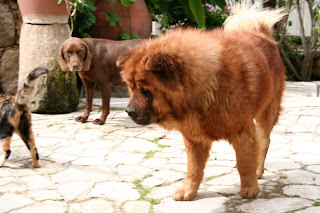 Now that dog wants to stay with us all the time. It lies cross our door, down the stairs, top of the stairs, even on the stairs ... to protect us. Even against the cats. If they are too pushy he hunts them away. Unbelievable. And very good for M's self confidence!
The other dog is a real street dog, a bitch that was probably abused previously. She is always wagging their tails at us, but if we get too close she turns and walks away. But that look in her eyes .... so sad! When we arrived she was heavily pregnant. A week ago we saw her suddenly slimmed. She has her puppies hidden somewhere and will show them for sure, one of these days. She looks less sad and dares to come closer now, at least ... when CC is not around, because he is very jealous.
Now most of the time the dogs are in front of our door. The Dogan doesn't understand it. He says it never happened before. :)
Posted by Periscope at 16:48